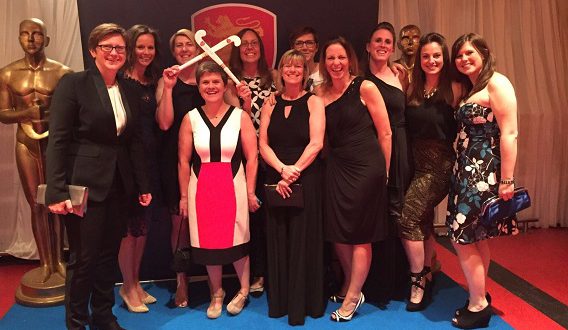 On Saturday May 20th 2017 BHC’s Ladies 3rd XI attended the England Hockey Awards as finalists for Women’s Team of the Year.

The evening was an (almost perfect*) culmination of what was a fantastic season for the team. Having achieved two promotions in succession, from Channel Division 1 in 2015/16 and East Division in the current year, being shortlisted for the award was such an honour.

*It was almost perfect as the team didn’t actually win, but it was certainly a memorable night!

The day started with a fitting mini(fun)bus ride from Bournemouth to Leicester. Reminiscent of many of the “fun bus” journeys experienced over the course of the season; with our trusty driver Pip Woods at the helm; and quiz questions at the ready from quiz master Lenny.

The awards evening started well when we discovered that Gisele Ansley, GB and England international, was going to be joining us at our table! Before we got to meet her we bumped into our neighbours, New Forest Hockey Club, who had been shortlisted for club of the year, and also had a quick photo with Danny Kerry (Head coach of the England and Great Britain women’s hockey teams).

Anyone who knows the ladies in this hockey team will know that the night included lots of wine and laughter, frolicking on the dance floor and subsequent sore heads in the morning!

Whilst we didn’t win, it was an evening never to forget and a brilliant way to end the season with fantastic team mates and a super coach.