The WGMA European championships took place in Glasgow this summer (20th – 27th August) with our very own Colin Kimber (GK) and Brian Perryman (midfield) playing for England’s Over 70s team.

I’m pleased to report that the team won GOLD having won all their games, and conceding NO goals!

England beat the Welsh in their opening game 3-0 on Sunday 20th August; then took on the Belgians on Tuesday and thumped 7 past their keeper, conceding none (7-0); followed by a 5-0 victory against Scotland on Wednesday; and a penultimate 0-0 stalemate on Saturday against the Dutch.

…German Singh, Adrian Robertson and Barry Mills all had an excellent game in defence as did Stephen Stowell up front and Brian Perryman in control of the midfield. Both teams had several penalty corners, but due to good defensive work by the defence and goalkeepers neither side was able to score.

In the second half both teams continued to cancel each other out with both sides having one or two good scoring opportunities, including one excellent save by Colin Kimber, the England goalkeeper. As the players tired. spaces opened up and some hard running on both sides created chances in the last 10 minutes of play but they came and went.

The full tournament report by England Hockey can be found here.

England’s final and crucial game of the tournament was against Germany. The game ended 6-0 with Colin being merited for a “fine save in the third quarter”.

With 21 goals for, and none against, England were crowned victorious after Netherlands failed to beat the goal difference in their final game against Belgium (they needed to score 8 or more goals)

Congratulations to all who played for England’s Over 70s team, and an extra special well done to our BHC teammates Colin and Brian.

More information on both their playing careers can be found on our site – see National Representatives. 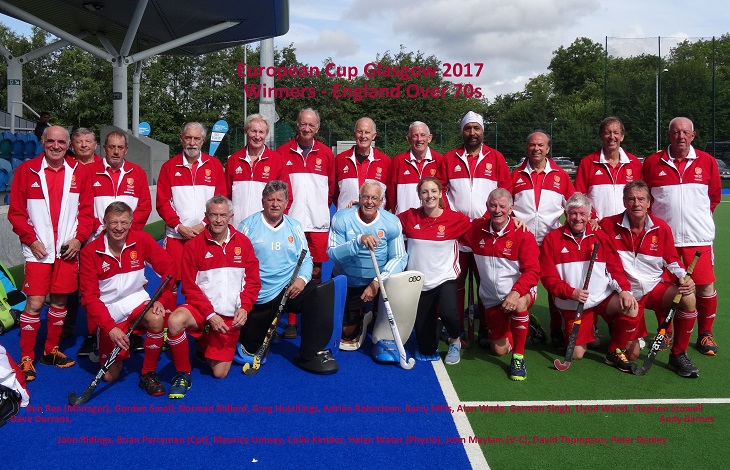